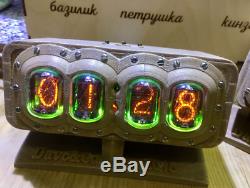 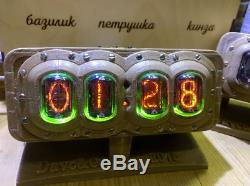 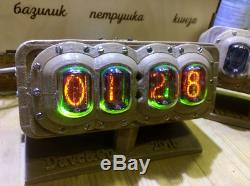 Table lamp clock on 4 gas-discharge indicators IN-12 from the distant Soviet past (1974-82), all other electronics are modern. The watch case is made of polymer materials (Pinocchio plastic) in a classic style. Power supply 5 volts, consumption 100 mA , from any USB charge. Materials: plastic, wood, metal hardware.

Size: 12 cm by 14.5 cm. The name Nixie comes from the abbreviation NIX 1 - Numerical Indicator eXperimental 1 (experimental digital indicator, development 1). The name was assigned to the entire line of such indicators and became a household name.

In recent years, the popularity of discharge indicators has increased due to their unusual antique look. Unlike LCDs, they emit soft neon orange or purple light. To UNITED STATES OF AMERICA. Asia and Europe and Oceania. We do not mark merchandise values below value or mark items as "gifts" - US and International government regulations prohibit such behavior. We are a trading company providing excellent service and quality. These watches were collected under a special order and presented in a piece. The item "Nixie Tube Clock in a plastic case in the steampunk style on gas lamps" is in sale since Tuesday, August 13, 2019. This item is in the category "Consumer Electronics\Vintage Electronics\Other Vintage Electronics".