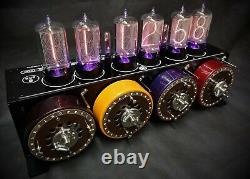 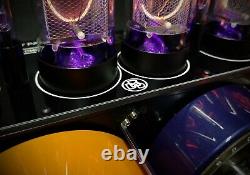 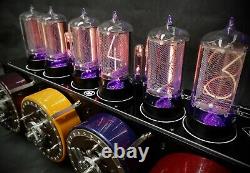 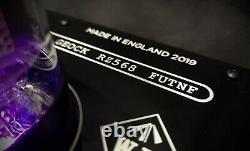 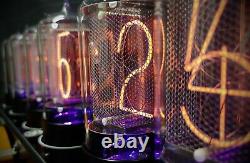 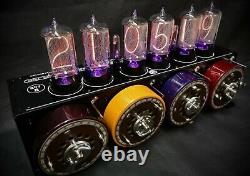 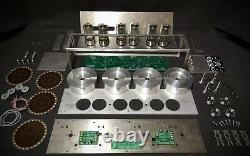 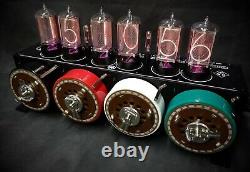 The Bombe Clock from Bad Dog Designs. Made as a tribute to the late Alan Turing, the Bombe was an electromechanical computer developed in complete secrecy during WWII to decipher the encoded messages produced by the German Enigma Machine. The machine used drums with the letters of the alphabet on the perimeter that rotated and matched with an electrical circuit inside, it tried hundreds of combinations until made a match. Once the match was made, the drums stopped rotating and the decoded message was read off the drums as indicated by the metal pointers. Recently the work of Alan Turing was portrayed in the film'The Imitation Game.

The Bombe clock is a totally accurate 1:1 replica of the original machine, made from hundreds of precision CNC machined parts and months and months of development work, and many process in the construction from laser cutting to anodising. The time is displayed on 6 giant handmade Nixie tubes, and the clock uses satellite technology to always show the correct time. No detail skipped on the build, from the solid brass'Bombe' nameplate on top, to the original 1940's Tuffnol material used to produce the discs on the front of the drums.

Each drum has its own independent brushless motor with a variable speed drive, and inside the clock is a hidden code. With the Bombe running, the drums work to make a match to find the code. The original machine at this point would stop, but the clock will chime to indicate a match and continue to rotate. You can of course leave the drums off, so you can see the detail while the clock is on display. The Clock measures just over half a meter (20") long and stands 25cm (10") tall to the top of the tubes.

They also weigh in at over 10Kg. Each clock is hand assembled in my workshop in Staffordshire UK, and are usually made to order, to that end you can specify what colour drums you would like on your own Bombe. There are many functions available, but to list a few - the clock displays outside temperature as well as date.

It can be programmed to shut down at night and wake in the morning. You can have 12 or 14hr mode, full RGB lighting under the tubes, that changes colour on the hour. The tubes come with a lifetime guarantee, and use Neon to produce the glow, rather than heat as in a standard filament bulb. I have been making Award winning Nixie clocks for over 5 years now, the Bombe being the most complex of my designs to date. Within the UK I will deliver these in person and set up and configure in the end location.

The item "The Covert Bombe Nixie Tube Clock from Bad Dog Designs Codebreaking in Secret" is in sale since Tuesday, May 21, 2019. This item is in the category "Collectables\Militaria\World War II (1939-1945)\Other World War II Militaria". The seller is "bad-dog-designs" and is located in Cannock.